1959 Pontiac window sticker sample. All 1959 Pontiacs used the same form, but the text formatting varied from plant-to-plant. These 1959’s are difficult to do, and we are the only source of these at this time. You must have a build sheet or other original documentation in order for us to create a window sticker. Please contact me before ordering. 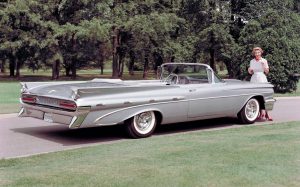 1959 was the first year for Pontiac window stickers, and the 1959 version is quite unique. All 1959 Pontiacs used the same form, however the assembly plant name was pre-printed and was not in the same font as the rest of the window sticker. 1959’s also used a very fine typewriter-style font, not the style that was used later in the 1960’s that was less defined.