1973 Trans Am window sticker sample. 1973 Pontiacs all used the same form, but text formatting varied from plant-to-plant. Your window sticker may vary slightly from the one pictured based on the production plant where your car was built (see description for details). 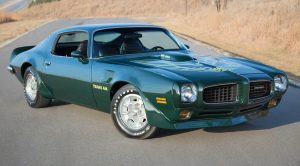 1973 Pontiacs all used the same form. Known as the “red” form, these began appearing mid-1972. The redesign included a new Routing Code box in the lower left corner that contained shipping codes. Occasionally there’s a giant letter or number, made up of individual characters, which signifies the carrier code (example; B, M, 42, etc.). It was made large so that it was easy to read for the transport loaders and drivers.

Our window stickers have the correct information in this box, so depending on where your Pontiac was built determines whether we add the giant letter/number.