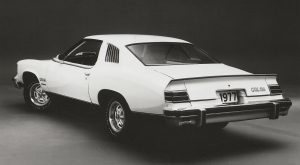 1977 Pontiacs used two different forms. They appear similar at first glance, but side-by-side you can see some noticeable differences. Based on the model, assembly plant, and when your Pontiac was built will determine which version you will receive. This was also the first year that a message was added to the window sticker stating which GM plant manufactured the engine. This began during the 1977 model year, so early 1977’s will not have the message. We have determined the approximate week that the message was added to Pontiac window stickers. As with all our window stickers, these 1977 forms had to be created from scratch. We pay attention to the details.