1979 Trans Am window sticker sample. This is the general format used for all 1979 Pontiac window stickers regardless of model. Your window sticker may vary slightly from the one pictured based on the production plant where your car was built (see description for details). 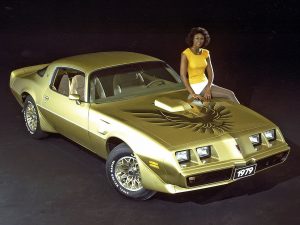 1979 Pontiacs all used the same form. Text formatting varies according to the assembly plant where your car was built. Many 1979 Pontiacs used a two-page window sticker as Pontiac was breaking out option content (example; Custom Trim, Lamp Group, Special Edition, etc.) and NO CHARGE standard equipment items were now being listed. All these extra lines on the window sticker often caused an overflow condition necessitating a two-page window sticker. We also pay special attention to details such as how the options were sequenced.

We also have a nice reproduction of the EPA sticker that accompanied the regular window sticker. This can be added to your order if you choose, but at this time we are only doing EPA stickers for Firebirds with the 301, 400, or 403 engines.